Published on January 29, 2013, by KT in Other Things.
How many times in a row do you have to do something before it’s considered a tradition?  Is two years enough?  I hope so, because tradition is totally the justification for our upcoming mini-vacation.
You see, Tim and I have back-to-back birthdays – his is literally the day after mine.  Because they’re so close to Christmas and so close to each other, gift giving gets pretty difficult.  The only thing either of us ever seems to want is time – to relax, to have fun, to not think about work for a while.  So every year (by that I mean, the two years we’ve been together) we gift each other a trip to Disneyland. 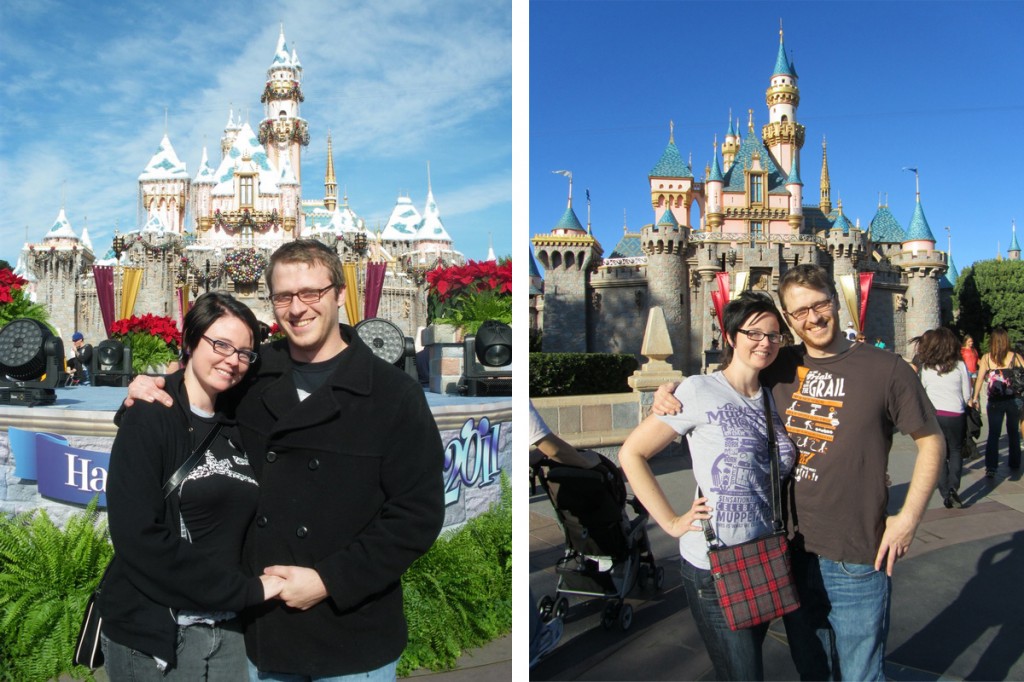 The guys who take these photos always pose us all weird. Tim does not usually put his hands on his hips in a jaunty fashion.

Why Disneyland?  I don’t have kids, after all, so I don’t NEED to go places like that.  If you’re a travel snob, you might even turn your nose up at the thought of paying to stand in lines and see ‘lands’ based on real places you could actually visit without the touristy craziness.  To some, I’m sure Disneyland seems like a nightmare or a waste of money, but it’s the perfect birthday vacation spot for us: 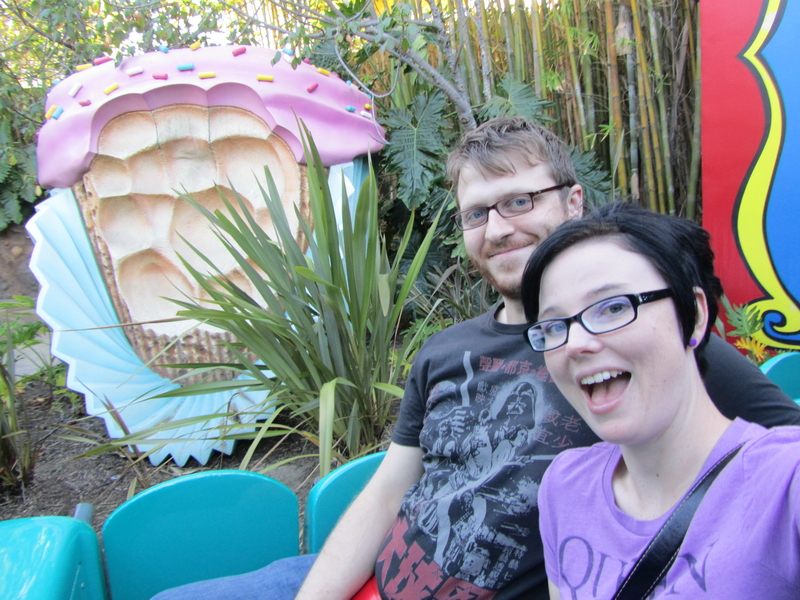 Sleeping in? FUN. Eating churros? FUN. Rides? FUN. Hearing the instructions for the Chew Chew train in Spanish as read by someone with a thick German accent? WAY BEYOND FUN.

This year, we’re changing it up just a bit – Tim’s brother Ted is joining us, and we’re going to fit in Six Flags as well.  That theme park wouldn’t be my first choice because I don’t like rollercoasters (the whole fear of falling thing) but I’m happy to tag along and watch the stuff while the guys do their thing.  My feet will probably be bloody stumps by then anyway.  We’re also going to splurge on the hotel and stay at the Disneyland Resort because, holy crepes, I am THIRTY!  This is an extra special one. 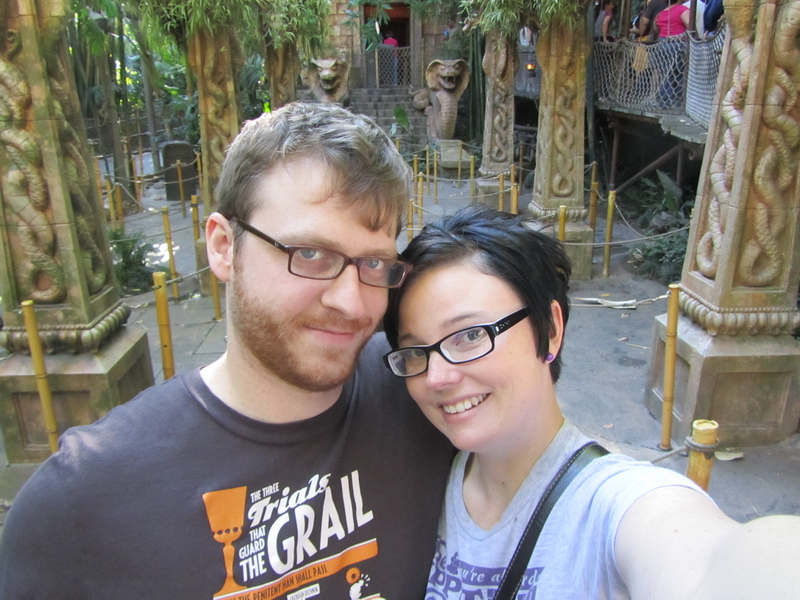 Our collective favorite – waiting in line for Indiana Jones.

Speaking of being 30, you might be wondering Disneyland is as fun as an adult as it was when you were a kid.  To that, I’d have to say – I have no idea.  I was one of those children who grew up without ever visiting DL or any other major theme park.  My mom isn’t into that kind of travel, so we did a lot of camping and went to places like Old Keno Bay instead.  I’m not knocking my childhood by any means – those vacations are probably why I have wanderlust today.  But the result was that I first visited the Disney theme park when I was 21 years old.  I’ve been 7 times since then (which I did not realize until I added it up just now, wow) and each time has been a blast… with the noted exception of New Year’s Eve. 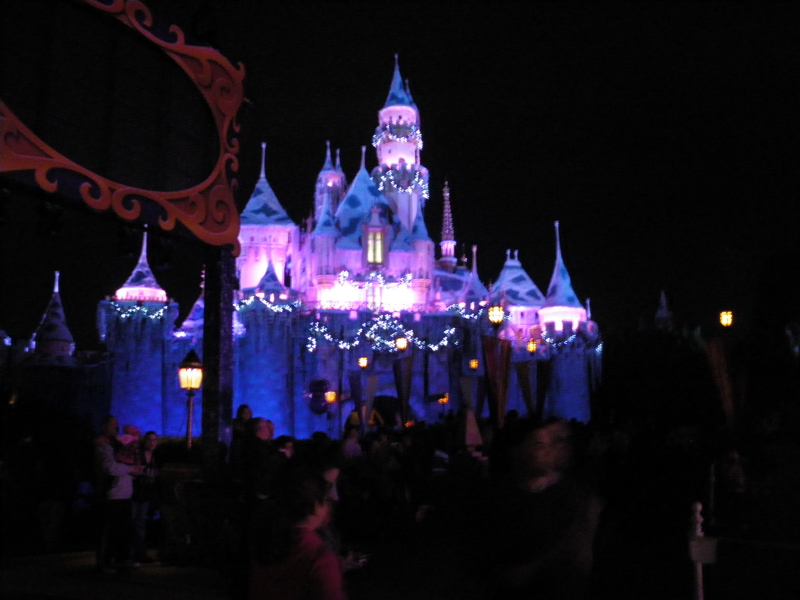 The holidays at Disneyland are beautiful. But check out the crowd… is it worth it?

Do NOT go to Disneyland on New Year’s Eve, y’all.  Terrible idea.  It was a nightmare I could have prevented if I’d just done more research.  So if you’re looking to plan a trip to Disneyland, I highly recommend you check out these sites: 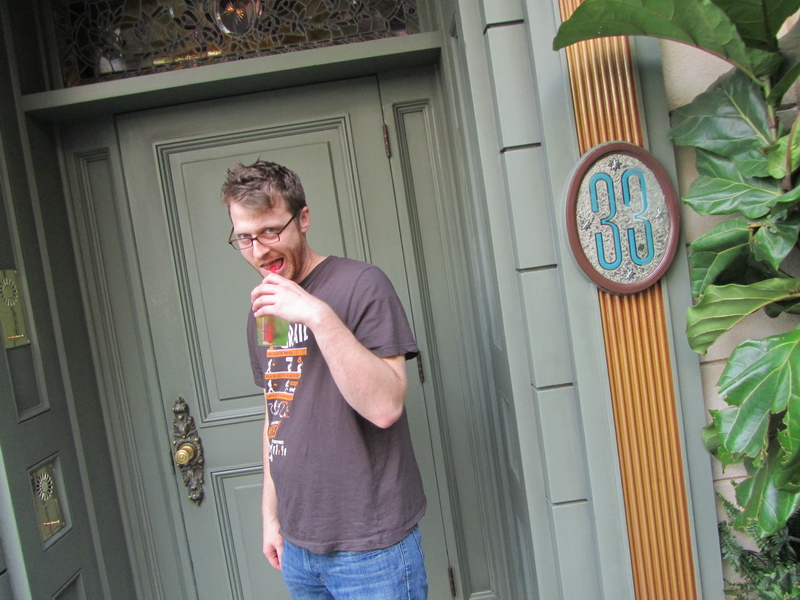 Tim drinks a mint julep outside the ‘secret’ entrance to Club 33.

Also, if you’re looking for discount admission tickets, check out LAFunTickets.com or BestTicketsHere.com.  We’ve used both and they work the same way – they pay a discounted rate for bulk 6-day+ tickets and rent them out.  You pick up the tickets from them, use them for the days you booked, and then return them when you’re done.  Is this against Disney’s terms of service?  Honestly, I have no idea.  But we’ve never been stopped and, though the offices look shady, we’ve had only good experiences with both companies.
We’re off tomorrow morning!  In fact, I should probably be packing…
No Comments.
Tags: 30, birthday, disneyland, fun, road trip, tradition, travel