Snorkel Stories from the Big Island

Published on July 1, 2014, by KT in 22. Visit All Hawaiian Islands, Adventures, Featured.
*Europe planning continues!  While I research train passes and cheap eats, please enjoy a flashback to our time in Hawaii.*
When people ask me what I liked best about the Big Island, I don’t have to think about it – it’s the snorkeling!  And the best thing about the snorkeling?  We saw SO MANY turtles!  When we went to Maui the year before, we saw 1 or 2 turtles and it was mind blowing.  It was one of our highlights (along with almost being breached on by a whale – such a cool trip).  On the Big Island, I think we may have seen a dozen.  It was almost barely notable by the end – oh, hey, there goes another sea turtle. 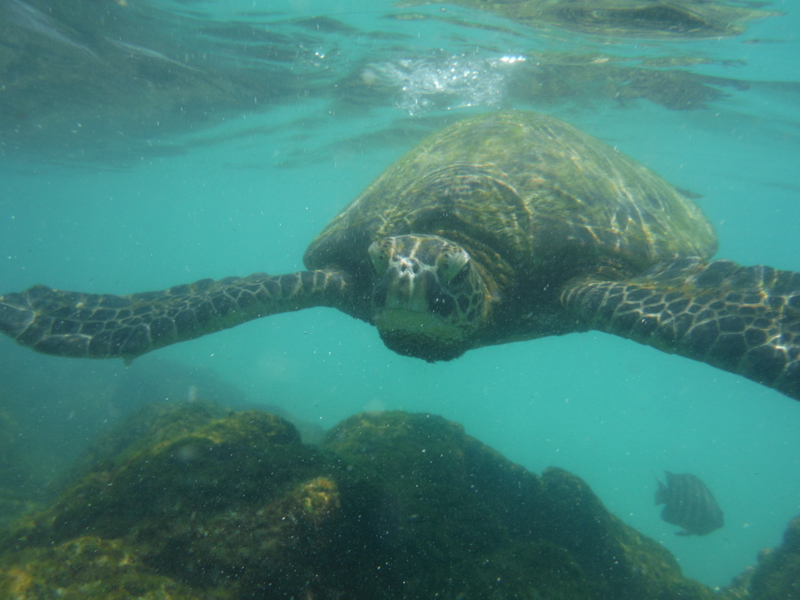 On our first day on the island, we saw 2 or 3 turtles just hanging out by a wall while we were walking down the street.  If we’d been wearing the right gear, we could have just hopped in and hung out with them.  A couple days later when we attempted to swim at the ugly, gray sand beach near our condo, we saw another turtle just chilling on the rocks.  Maybe he had also heard about the shark sighting?  When we went back a few days later, we saw 2 more turtles there.  We finally got close to some turtles at the first beach where we snorkeled, Kua Bay.  At one point, we think there were 5 turtles eating around some big rocks near the shore. 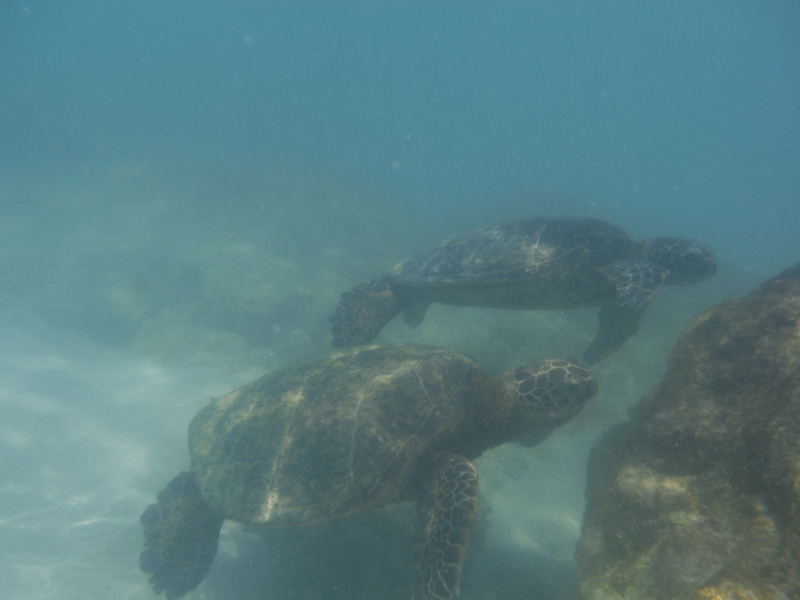 We saw another turtle at Beach 69, my favorite of all the beaches we visited.  It was a long drive – you couldn’t get there without a rental car – but there were fewer people, easy parking, and a lot of shade.  There were so many trees that you could barely see the water from the parking lot, but when you finally got a peek… WOW!  It was that glowing turquoise blue that you see in ads for impossibly gorgeous resorts. 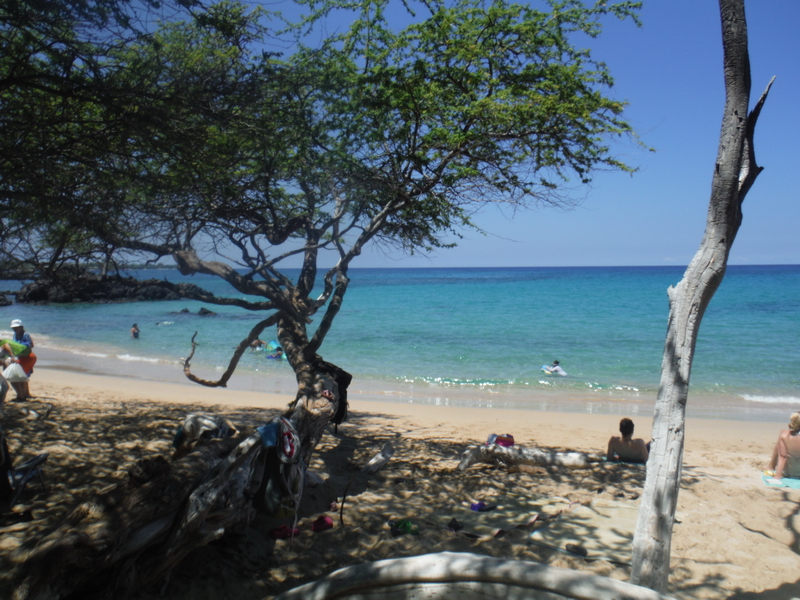 That color is real and it’s all over the Big Island (to compare to Maui yet again, the Big Island has much more clear, prettier, and warmer water with weaker currents).  We set all our stuff up under a tree and got in the water expecting nothing in particular – it looked like a regular sand beach to me.  But as soon as we started to venture towards the rocky areas, we found an amazing coral garden.  It was stunning – tropical fish were everywhere, dodging as you swam at them, darting around colorful coral formations.  We even found a little hidden beach in a cove!  I kept losing the group because I was too enthralled with my surroundings (and I’m also an idiot – NEVER EVER lose your snorkel buddies, it could be way dangerous), but Tim and his brother Ted saw a fish that changed colors to match the sand.  I saw a few pufferfish, which are my favorites.  And I followed a turtle around for a while, just to see where he’d go. 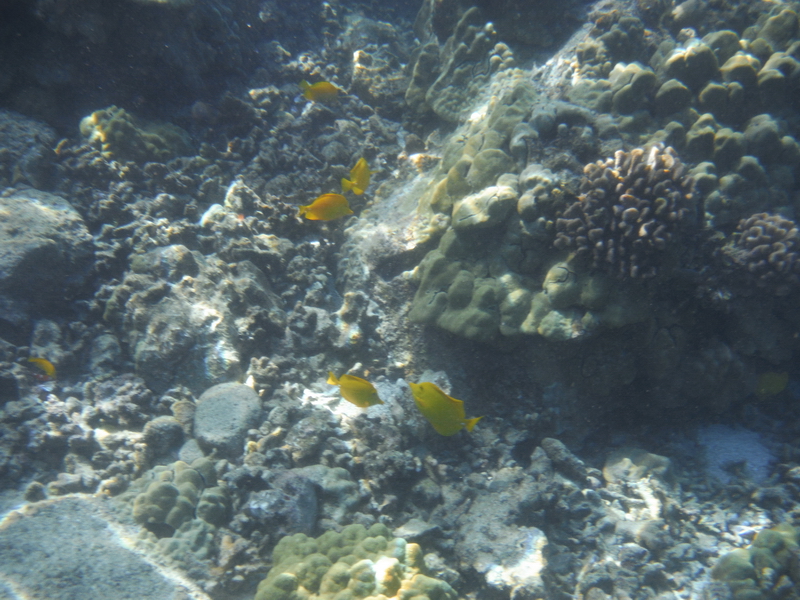 I felt like Ariel!  If a crab and a seagull had started singing to me, I would not have been surprised.  I’ve wanted to be a mermaid since I was 8 years old and saw Splash, so this was pretty much a dream come true. 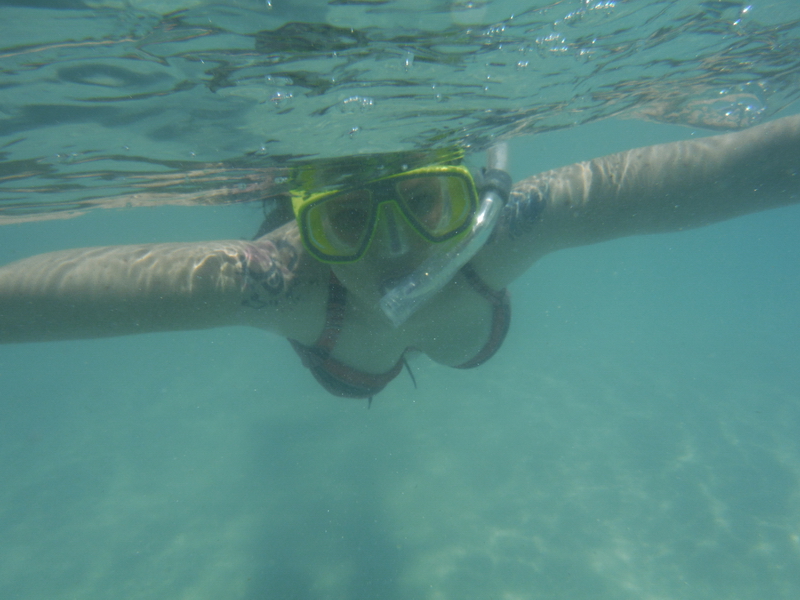 Clearly I’m NOT a mermaid!

Kua Bay and Beach 69 were self guided snorkels where we pretty much lucked into seeing decent sealife.  If you’ve never snorkeled before, I wouldn’t recommend it – you’re better off starting with a tour group.  We did a tour on our final day – I think it was 5 or 6 hours long and went to 3 locations with some scenic stops in between. 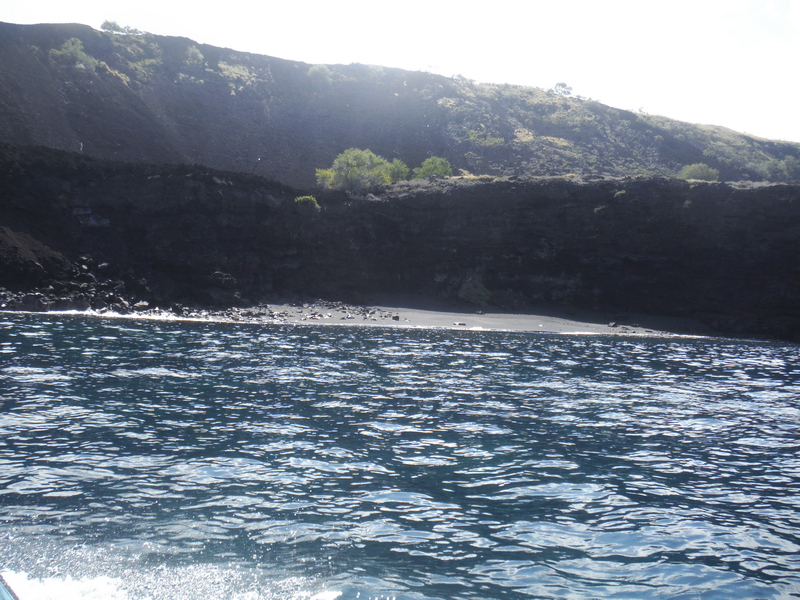 We saw our first turtle at our first stop, almost immediately.  I believe it was Kealakekua Bay but I’m not 100% on that. The area where we jumped in was very deep and there wasn’t a ton to see.  Like the other snorkel tours I’ve been on, this one started at the least impressive spot.  We were swimming for just a few minutes before we saw a very large sea turtle swimming up from the bottom, slowly and gracefully. He was practically posing for us and I got one of the best turtle pictures of the trip.  After exploring a bit more, I found a much smaller turtle and followed him around for a bit.  I love the way that turtles swim – they’re slow and easily knocked around by currents, almost clumsy (especially in the rough waves around the eating rock at Kua Bay), and yet still somehow dignified and cool.  They truly, literally go with the flow, and they don’t seem to mind being knocked off course a bit.  I could take a lesson from these guys, I tell ya. 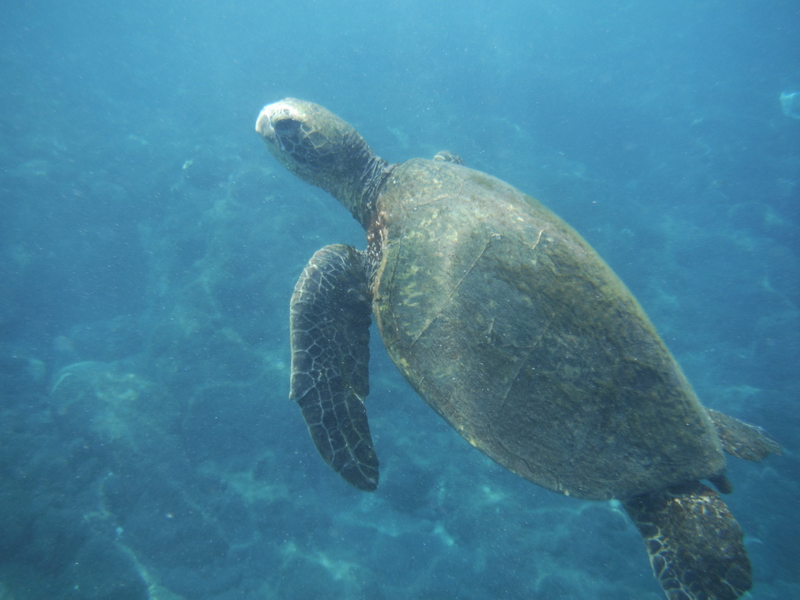 Our two other stops on that tour were Place of Refuge and the renowned Captain Cook’s monument.  I didn’t see any turtles there, but they were incredibly beautiful.  They both had clear water and huge reefs with tons of fish.  Captain Cook’s was particularly impressive – we saw spinner dolphins and a giant eel, among other neat things – but it was also very crowded with people.  I wouldn’t skip it, but I’d definitely do a snorkel tour that went to more than just Capt Cook’s. 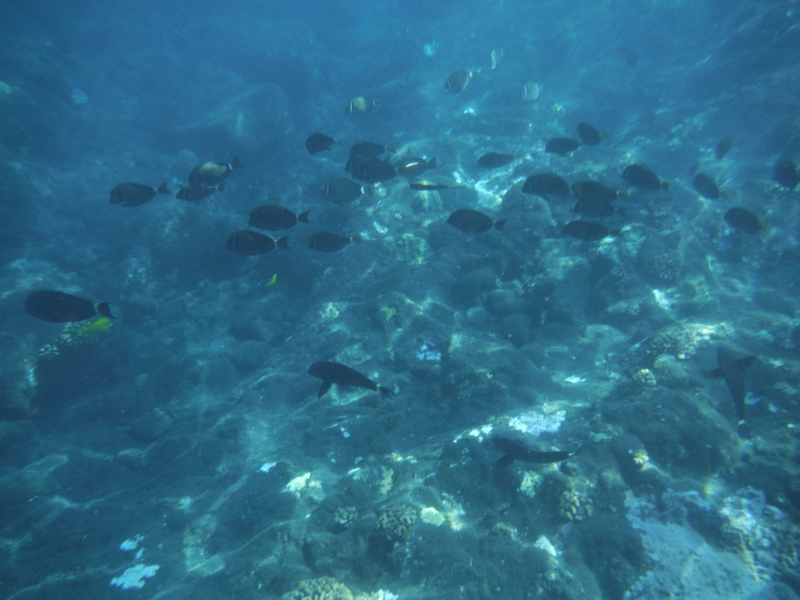 Sidenote: I really loved the tour company we went with, but I’ve completely forgotten their name.  The boat was nice, the food was good, and the crew were kind and very funny.  There was a hilarious incident that involved Tim peeing off the back of the boat but he might get mad if I write about it, so shhhhh.  Anyway, I’ll update when I remember the name because they deserve a shout out. 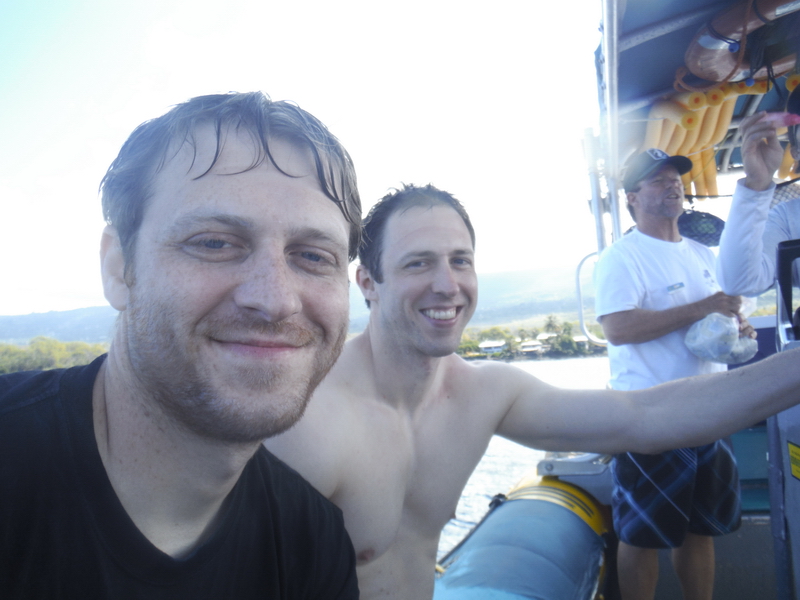 So, not all the places where we swam had turtles, but they did all have one particular species of fish – Rhinecanthus rectangulus. Humuhumunukunukuāpuaʻa. The rectangular triggerfish, otherwise known as Hawaii’s state fish.  These little guys and their other triggerfish cousins, like the Picasso, Lagoon, Black, and Lei triggerfish, are all over the place.  We saw them in every place we snorkeled.  They look pretty harmless, don’t they?  With their long, odd triangle snouts and the eyes so high up on their little fish faces.  They certainly don’t look like they could bite you with their tiny little toothless mouths.  And yet… 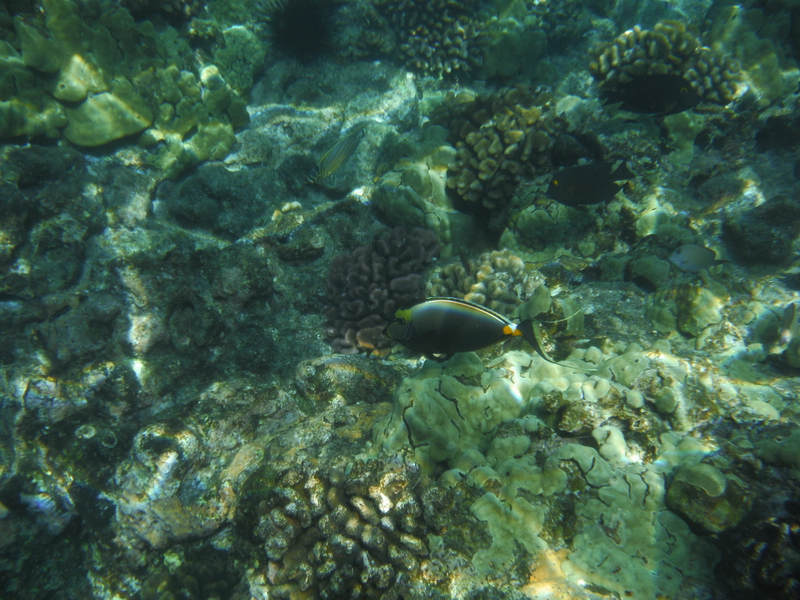 Let me back up and say that Tim’s brother Ted was worried about sharks.  He was a bit on the paranoid side.  I have to give him credit, it never stopped him from getting in the water, but he was extra wary.  Who would have thought he had to be worried about being attacked by a triggerfish?!
We were finally able to go for a swim at the aforementioned ugly beach near our hotel.  What we found out when we stuck our heads under water was that while the beach, called Kahalu’u Beach Park, wasn’t very nice looking, the underwater part was beautiful.  There was no current because of a sea wall and there were coral, rocks, and fish EVERYWHERE.  It was like sticking your head in an aquarium. 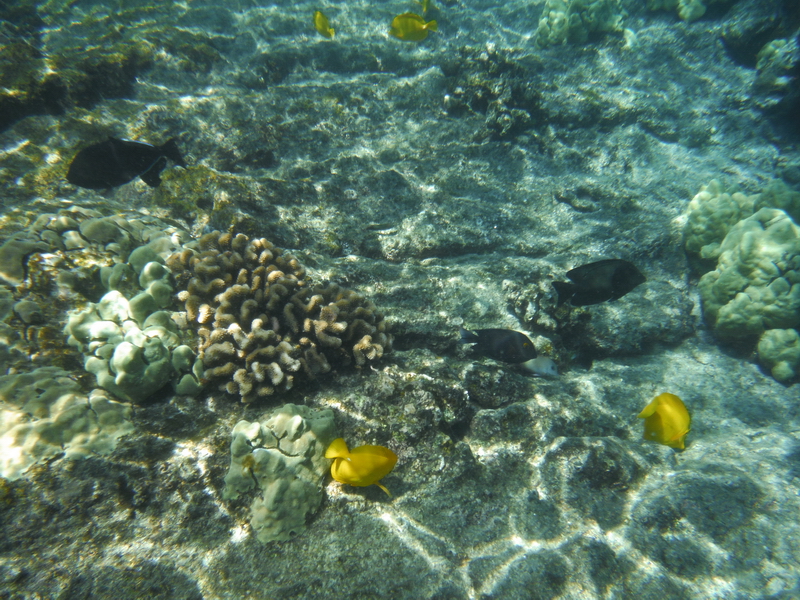 I have vivid memories of going to work with my mom as a child and being totally captivated by the aquarium one of the lawyers had in his office.  If we went in on weekends, I’d break into his office just to look at it.  He had a triggerfish, yellow tang, butterflyfish, wrasse, pufferfish, and even a little moray eel.
Guess what we saw at Kahalu’u?  Triggerfish, yellow tang, butterflyfish, wrasse, pufferfish, and moray eel.  All much bigger than they had been in Mister Lawyerguy’s tank and not at all freaked out that a bunch of weird humans were swimming beside them.  These fish had almost no fear, which is what lead to one of them getting stepped on. 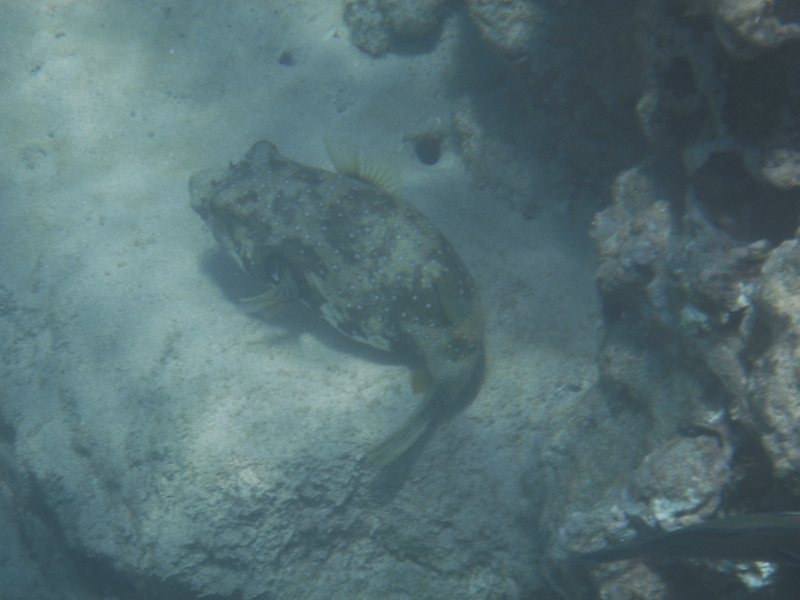 Accidentally, while standing on some rocks and trying to get our bearings, Ted stepped on an eel that had been hiding out.  It got understandably mad and swam away.  A few minutes later, Ted felt something pull on his reef shoe and thought he caught it on something.  Then it happened again.  Then it happened to Tim.  Then I swam up and it happened to me.  When we got a look at what was going on, we saw a rectangular triggerfish trying to bite our toes!  We kept shaking him off but he kept coming back for more.  The little guy just didn’t want to give up!  We’re pretty sure the eel enlisted his friend for a bit of revenge.  We got a good laugh out of it – who gets attacked by a triggerfish?  After we got back, we found out that it’s pretty common.  In fact, a friend of Tim’s mom had been “bitten” by a triggerfish at the exact same beach years earlier.  Turns out they’re very aggressive, so beware – the bigger ones, like titan triggerfish, can actually do some damage because they have a hard ridge over their mouths.  If it’s a small one and you’re wearing reef shoes, let the hilarity ensue.
The fish attack inspired Tim’s mom to gift us a tile with a triggerfish on it, which I absolutely love.  Whenever I look at it, I think about the surprise of that underwater world – a nasty gray beach hiding a wonderful coral garden that housed all the pretty tropical fish I stared at when I was a kid, plus a few fearless sea turtles and one very pissed off triggerfish.
In the next installment of my random Hawaiian musings, I’ll talk about everything we did and ate outside the water.  And because I couldn’t fit in all the snorkeling pics I took, here’s a slideshow!  (I used a very cheap underwater camera and have done no image processing – I hope you’ll forgive me for that.)