What a year, what a year. What can I say about 2016 that hasn’t already been said by 1000 thinkpieces? It sucked. It was a raging dumpster fire. It will forever be known as the year the entire world jumped the shark. It was also the first year in which I haven’t posted anything… well, until now. I didn’t even set an intention for the year! Maybe that’s why it felt like it was all over the place?

Honestly, I was too busy to blog. My job changed, so I did some new stuff at work and started to feel like I have a career (Thing #27). I was grinding away on getting that college degree (Thing #23) – my GPA is a 4.16! I volunteered at AAWL for most of the year (Thing #20). We got a venue and photographer booked for our wedding, designed and mailed Save-The-Dates, and started collecting globes for our centerpieces (Thing #14). And I traveled a lot: Kauai in April, Iowa and then New Orleans in May, San Diego in September, Toronto and Nova Scotia in November, and (wait for it) New Zealand and Australia earlier this month! Yep, I get to cross off one more Hawaiian island (Thing #22), three countries, and one continent off my list (Thing #29)! I didn’t forget about the list, by the way. It’s still there, in the back of my mind. Sometimes I get re-energized by how much more exciting stuff is in my future. Sometimes I get depressed by everything I think I’m not going to get to do. But it’s always there, reminding me to try something new, to say ‘yes’ when adventure calls. I’ve been thinking about the list, I just can’t seem to find the time to write about it.

From a travel perspective, a school perspective, and even a career perspective, 2016 was pretty good. But in many other ways, it was… terrible. The election, of course, has left me in near constant fear of WWIII. Then there’s Brexit, the continued deterioration of the situation in Syria, and acts of terror around the world. The deaths of David Bowie, Prince, and so many others made it feel like my generation is starting to lose it’s pop culture heroes. Closer to home, one of my best friends, who I’ve known since I was 6 years old, was diagnosed with breast cancer – she finished radiation earlier this month, shortly after starting grad school. Another friend got into a terrible car accident and spend 22 days in ICU – his face looks slightly different but his great sense of humor remains unchanged. My beloved dog Grif had diabetic ketoacidosis – I am still paying the vet bills but it’s worth it to have my buddy alive and well. And I dealt with some things that are too personal to share, even here, on this blog that is basically my diary.

And the last thing, the worst-of-all thing, is that my friend Drea died a couple weeks before Christmas at the age of 39. It was very unexpected and we still don’t know exactly what happened. Drea and I worked together for 6 or 7 years and remained friends when we were no longer coworkers. She was nuts, a true character, an absolutely OOAK human being, and I loved her. The world will be a little less bright and Facebook will be a lot less interesting without her. After the cut, I’ve copied my memorial message to her. As woefully incomplete as it is, I couldn’t rewrite it any better here. And even thought she’d absolutely HATE it, here’s a picture of us with Jill, from way back in 2010: 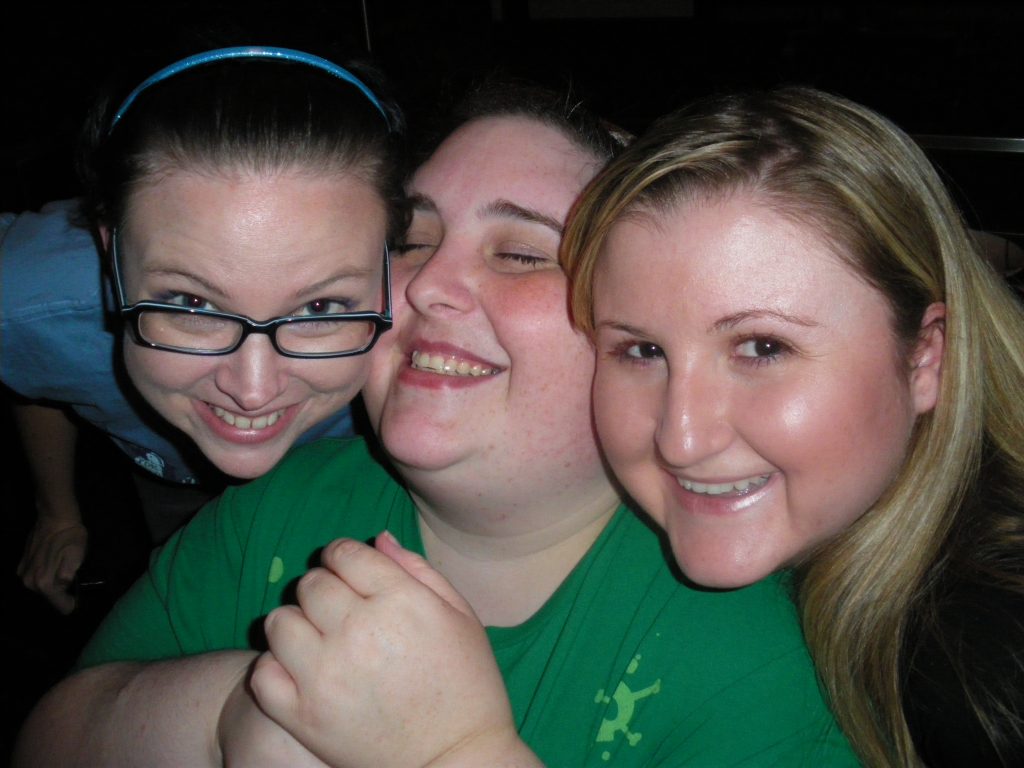 Drea. Drea Drea Drea. You mad genius. You crazy cat lady. You intensely funny, deeply generous, wrathful little T-Rex. I hate that you’re gone. I hate that you’re gone before Christmas. I’ll never forget the annual desk decoration saga. You’d pick one person’s cube & go crazy with holiday decorations. You acted like it was to annoy them, and maybe they even acted annoyed, but everyone really loved it. You most of all. I still have all the decorations from when it was my year, btw. I still have every gift you’ve ever given me.

I loved you like family, you know. Our little corner of GD, the Grilled Cheese / Warm Room contingent, really felt like family to me. We fought sometimes, we argued, we annoyed each other. We all had our problems, our weirdness, our quirks. But we shared our lives – we stuck together, ate our meals together (what a production lunches could be), and we made each other laugh. Oh god, we laughed so much. I loved laughing with you. You were blessed to be born into a computer age, because chat rooms and text messages were where your comedy chops really shined. No one has ever made me laugh more with an instant message.

You were so smart and so sharp. In addition to being witty, you knew about so many things, from history to cosmetics to k dramas. You had great taste in music. You always read the article, never just the headlines. You could so easily dissect an argument. And you were vicious when you knew someone else was wrong. If you weren’t such a deeply kind person, it would have made you seem like an asshole. Instead, you got respect. I learned so much from you and I sharpened my own debate skills on your whetstone. I loved our debates & I miss them so much.

You were so passionate about the things you loved (inside joke: “I’m passionate about… unspecific things…”). Your family & friends, your cats, make up, nails, creepy dolls, and, most recently, soap making… You could pick up pretty much any craft & give it a good go; you had so many hobbies over the years. You were passionate about justice and charity. You walked the walk. You bought a bunch of toys for Toys For Tots every year; you thought that kind of giving was fun. You were always ready with advice or a loan or a gift or a thoughtful gesture. You wanted so badly to help your friends.

You helped me. Sometimes, I didn’t want your help. Sometimes your advice was too forceful. You weren’t afraid to nag. It could be annoying! But you were rarely wrong. And you cared about people in a fearless way – you told people, including me, what they needed to hear whether they’d tell you to fuck off or not. You gave tough love. I needed that. When I was doing something unhealthy, you called me out. You stood up to me. You pushed me – in the right direction. That took courage and I’m deeply grateful to you for it. I wish I could have told you that.

I can’t say I ever fully understood you; who could? You were a contradiction, and, at times, a drama queen. I worried about you. I hope you weren’t lonely. I hope your anxiety wasn’t too bad. I wanted to see you more often than I did but it was always a toss up as to whether you’d show when we planned something. Some of my non-work peeps called you my “invisible friend.”

Our last interaction, the day before you passed away I think, I teased you about making up an excuse not to come to my wedding. I hope you knew I was teasing you because I loved you, because I really wanted you to be there. You were part of the family I chose. I hope you knew.

And I hope, where ever you are, you’re rolling your eyes at how sappy I’m being. You’re saying, “Ha ha, I have a rock solid excuse now!” And giving me sassy finger guns with a big grin. That you’re putting your feet up and thinking, “At least I don’t have to live through Trump’s presidency!” Even though we all know you had a love-hate relationship with political theater and the next four years would have been ripe for discussion. Oh god, how your posts will be missed. Now I can actually consider giving up FB.

If souls are real and ghosts are real, I hope you haunt the shit out of your enemies. You’d love that. And don’t forget, we have a scheduled calendar event to fight to the death sometime in the 2020’s – I hope you rise from the grave to honor that commitment. I would half expect that kind of move from you, you incredible, fantastic (another inside joke) woman.

Anyway, here’s the tl;dr for you: My life is better because you were in it. I’ll never forget you. I’ll miss you, friend Drea. I’ll miss you.